Just a quick check in with justkinkinit online doppelgänger

Hey guys,
While this is just a quick post please know more posts are in the pipeline. Sometimes I feel like there aren't enough hours in the day to do all the things I need and want to do but I mean so well! Besides, I have a wealth of content and information to share!
Ok ok.
Remember, back in October I discovered there was a twitter with my domain name? While no one ever officially approached me about it rather than a weird tweet (which i had to initiate contact) read here in case you missed that blurb.
I wanted a dialog but that didn't happen. They just stopped tweeting then would start back up. Well I discovered the group now has a website an they have stopped officially communication thru twitter.
So while I am just opening up JKI's twitter of private, you can find me @justkinkinitcom where I think Ill do more updates about my hair and things that peak my intrest in the twitterverse.
I do wish them success as I have said before we are apart of the same movement. Just wish there was a dialog. 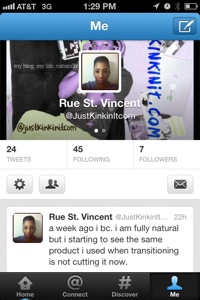 Thanks for your comment! Look around and keep posting!